Moving rail cars up and down the side of a mountain seems like a very simple form of energy storage. It is cost-competitive and can provide a wide range of energy services to utilities, according to William Peitzke, the founder and Director of Technology Development for ARES – Advanced Rail Energy Storage 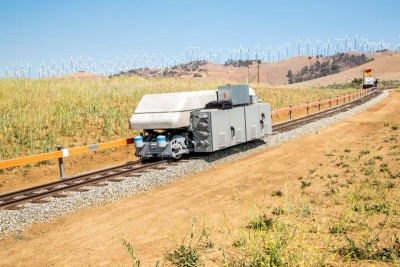 In three years, a fleet of automated 300-ton electric-traction-drive shuttle trains should be moving up and down a 7.2% grade slope in the mountains of Nevada.  The ‘Advanced Rail Energy Storage’ (ARES) ancillary services system could provide 50MW of fast response power to help stabilize the California electricity grid.

The 34 shuttle units on the ARES system will operate on a 9.2 km track with an elevation differential between top and bottom of 2100 feet (640 meters).

The Nevada system is actually designed to provide Regulatory Energy Management (frequency regulation) services to the California Independent System Operator (CAISO). As a Limited Energy Storage Resource (LESR), it will be capable of discharging at 50MW full power for 15 minutes. Capital costs for the project are expected to be around $40 million which equates to about $800/kWh.

ARES Regulation Energy Management system is their smallest planned form of energy storage.  “When Storage Services Agreements become available, ARES intends to deploy our core large scale energy storage technology in which shuttle units transport a field of 230-ton masses between lower and upper storage yards providing full power for 8 hours of duration,” says Peitzke. “Typically that would look like a 680MW system with 11,400 masses.  Basically we take a mass that is twice as heavy as water and elevate it 3 times higher than customary with hydro projects with a far lower amount of friction.”

California has become a major market for energy storage solutions. In late October 2013, the California Public Utilities Commission set a target for three of the state’s largest utilities to have 1.3 gigawatts of storage in operation by 2020. The ARES system is being built close to both renewable sites and 230 kV transmission lines that take renewable power West, from Nevada, to the population centres served by the Californian grid.

The energy storage is intended to help regulate the grid and to deal with intermittency as California moves beyond its 2020 target of 33% Renewable energy on a grid with peak demand of 46.3 GW.

CAISO has been improving its market overview in preparation for the complexities of increased reliance on renewables. CAISO’s new Mission Critical Control Center includes a 25-meter video display that gives their renewables dispatch desk an overview of supply, demand and the best electricity supply prices at 3,000 separate nodes on the grid. The data are updated every 33 milliseconds with forecasts of market-affecting changes, including cloud movements.

Storage at the point of intermittent generation

“We don’t see ARES as in competition with flywheel or battery bank technologies in the regulation energy management market,” says William Peitzke. “Those technologies have their highest utility operating inside the distribution system. “

“We see ourselves as a transmission-grade energy storage technology. We can provide storage at the point of intermittent generation. We think that the biggest economic driver behind energy storage – at least in the US – is transmission upgrade deferral.”

Pumped storage hydropower is a great technology, says Peitzke. ARES would not be able to compete with pumped hydro where several days of charge or discharge may be needed. But that is not the bulk of the market.

“Generally, the market for storage tends to be an 8 hour requirement and in fact a lot of the utilities we talk with really only require five to six hours of discharge,” says Peitzke.

ARES is comparatively quick to build, where the topography is right. Pumped hydro usually requires a 10- to 15-year permitting and construction cycle. It is often dependent on the construction of a transmission system. Investors must carry risk on two interdependent, multi-year construction projects run in parallel.

By contrast, the construction phase for the ARES system in Nevada should take around 7 months. The short track for ARES Tehachapi pilot project was laid in 8 days. ARES claim one of their facilities can be built at approximately 60% of the capital costs of pumped-storage hydro. The capital costs of doubling the energy storage in the ARES system of a rated power output is under 20% of initial cost. “If we want to double the storage capacity of a system we simply expand the width of the storage yards to accommodate a doubling of the number of masses we transport,” says Peitzke.

And, of course, the ARES system does not need a resource that is very scarce around the wind and solar farms of Southern Nevada – water.

When an ARES energy storage system is not actively charging or discharging the operators can reconfigure its shuttle units says Peitzke.

The ARES concept is being tested on a 268-meter track in Tehachapi, California. A 5.6-tonne pilot vehicle is simulating responses to CAISO frequency regulation signal commands.

The slope of the track has not proved a problem.

“An ARES shuttle unit could climb up a 25% grade without breaking a sweat,” says Peitzke.

The pilot system achieved a full downhill stop and full reversal on a wet 9% grade, then back up to speed, in less than ten seconds. The team found no evidence of any wheel slip. To ensure the system meets a worst-case scenario, it will be limited to grades below 10%.

The biggest challenge at Tehachapi was the creation of reliable control and operations software for the automated system. It took longer than expected. The company has patented its solution. To minimize the chances of delays, the engineering for the Nevada system is starting with the automation phase.

The system includes a triple redundant safety system that prevents any vehicle from running away down the hill. Other challenges were ‘track creep’ caused by the expansion of steel rails that can be subjected to temperature changes from 0ºC to over 70ºC in a single day.

“One final element of testing that we have yet to do – because we have been side-tracked by the necessity to get the permitting started in Nevada – is direct synchronisation,” says Peitzke.

For direct synchronisation the motor/generators  on ARES shuttle units are set to a speed where they generate electricity into the grid at a frequency of exactly 60 Hertz. Then they switch over to a direct grid connector that bypasses all the variable frequency drive power conversion losses.

“Direct synchronisation is why we are running an AC system to begin with,” says Peitzke. “We go direct to grid and now the motors are operating as synchronous motor generators.  Those 300-ton masses rolling down a 7.2% grade can provide some of the heavy inertia needed to stabilize the grid by correcting momentary deflections in grid frequency.”

In the past, inertia was not a parameter that Californian utilities paid a lot of attention to, but the ARES team believe inertia would become a valuable commodity.

Over the next few years, many of California’s natural gas-fired Rankin-cycle generating plants along the Pacific coast will be shut down. The natural gas plants had poor environmental performance, but they provided much of the grid’s heavy inertia. Their power is being replaced by smaller renewable energy sources that are more distant from population centres. These new solar, wind or micro generators that use inverters or induction generators to deliver power to the grid provide little heavy inertia.

Nevada went to a lot of trouble to intelligently craft an export market for renewables into California with its 33% RPS, says Peitzke. They reinforced transmission facilities to get energy from solar projects. Coincidentally, Nevadan utilities such as the Valley Electric Association constructed an infrastructure of transmission lines that “ideally pre-wired” the area for energy storage, he adds.

It’s an enormous economic opportunity for Southern Nevada to position itself to be a Western Region energy storage hub.”

Outside the US, the ARES company is working closely with partners in China.

“We have identified Western China as a remarkable opportunity for ARES technology,” says Peitzke. “Again it is because of the topography of the sites. In Western China there are sites that are similar to those in Nevada, except in some cases they have twice the elevation differential. You can come out of the Gobi desert, which is below sea level, and run nearly 6000 feet [1800m] up a nearly constant grade alluvial fan adjacent to existing rail and transmission corridors.” The Chinese team are in discussions with the Chinese state grid.

“North Africa also has a strong potential market for ARES,” adds Peitzke. “There are areas in Germany that are suitable for ARES… We have more opportunities coming over the transom than we have staff to deal with them. We have to be very careful to stay focused.”

“For now we have got our hands full just dealing with the opportunities in the United States.”
https://www.youtube.com/watch?feature=player_embedded&v=zshJwVlbOeM

Aedan is a business communications specialist with interests in the development of new technologies and in environmental issues. He is a former managing editor of Supply Network magazine and former editor of Industry Europe. He has edited or written Annual Reports for public limited companies in the UK and the Netherlands. Aedan has also written extensively for Higher Education institutions, mainly on research and internal management issues.
View all posts by Aedan Kernan →
← An Energy Wikipedia
Safe Electrification of Argentina’s Poorest Homes →