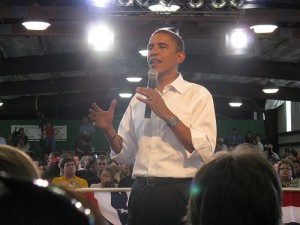 The second American presidential debate took place on Tuesday and the general consensus was that Barack Obama had the better of it, reversing the damage to his campaign from his lacklustre performance in the first. In a debate described as ‘combative’ and ‘feisty’ one of the key exchanges was on energy policy.

Over twelve minutes of the allotted 90 was taken up by the subject, confirmation of the rapidly increasing political importance of energy issues in the 21st Century. Coal, gas, oil and renewables were all discussed, but for many environmentalists the exchange was notable less for what was mentioned and more for what wasn’t. The two presidential hopefuls spent over twelve minutes discussing energy, but climate change wasn’t mentioned once!

In the case of Mitt Romney, whose position on man-made climate change has vacillated, this is unsurprising. But at first glance it seems much harder to understand why Barack Obama, who clearly does accept it, should neglect to mention it at all when discussing energy policy. Trying to divine his motives from the Eastern side of the Atlantic is difficult; perhaps he simply forgot, perhaps his strategists have calculated there is little political advantage in mentioning it, or perhaps he’s merely keeping his powder dry for the third debate. In any event, the two presidential hopefuls discussed the price of energy, energy efficiency, jobs created and lost in the energy industry and energy security, all without the words climate change ever crossing their lips.

I expect that my initial reaction to this was the same as most other environmentalists. Anger and incredulity that the two men vying to be the most powerful individual on earth could ignore the greatest single threat that mankind faces followed by the feeling of lead sinking into my soul. However, now that I’ve had time to think about it, I’m really rather pleased that climate change wasn’t mentioned at all, and here’s why.

Judging the value of renewable technologies

For as long as I can remember, any debate about renewable energy has inevitably involved repeated discussion of climate change and the role that renewables can play in reducing the emissions of dangerous greenhouse gases. Nothing much wrong with that, except the fact that this discourse usually ends up foundering on the rocks of the entrenched positions of the majority who believe that man-made climate change is real, happening now and profoundly harmful to the planet set against the minority who refuse to accept this. Yes, climate change deniers are a relatively small group, but you only have to look at the declining rate of planning approvals for onshore windfarms in the UK and the influence of the 100 or so Tory MPs who have publicly called for large reductions in support for wind power to see that this minority wields important influence.

So, if you are one of the minority who don’t accept that there is a need to reduce man-made carbon in our atmosphere and that justifys investment in renewable technologies, what criteria are you going to use to form your view of them? Leaving aside the zealots for whom every wind turbine, solar panel or anaerobic digestion system, is the work of Satan, the  rest are going to make their decision based first and foremost on price, with perhaps some consideration of job creation and security of supply thrown in. Or to put it another way, you are going to evaluate them on precisely the grounds that were discussed by the two presidential challengers this week.

Looking at energy simply in terms of the financial cost to the user may seem narrow and myopic to environmentalists, but it is unquestionably what many people do – all the more so in current straitened times. This is actually good news for renewables because the long term trend shows fossil fuel prices rising and renewables price falling. The price graph certainly isn’t linear and there are spikes and falls along the way, but the direction of travel is undeniable.

Yes, renewable energy is currently more expensive for the consumer, but costs are falling all the time and initiatives such as the recently announced Norstec network of 44 organisations tasked with bringing down the cost of European offshore wind will only accelerate that process. In certain countries, under certain conditions renewable energy already costs the same as fossil fuels, (link here to Uruguay and Brazil wind energy stories) so called grid parity, and although it’s impossible to be precise, this will probably happen across the board sometime in the next ten years or so and when it does, the last major hurdle in the way of global renewable energy development will be removed.

On the face of it, the omission of any mention of climate change in the presidential debate, should be a cause for depression among environmentalists. However, the fact that the discussion on renewable energy was framed in the way it was, on issues of price, job creation and security of supply, is in fact a tacit admission by both of the candidates that it is now an established and mainstream part of the way our power is generated. That is something that environmentalists can feel rather pleased about.

Writer of the Greenland blog about environmental and energy issues on the Greenwell future website.
View all posts by Rupert Sheldon →
← Carbon Markets – Light at the end of the Tunnel or a Near-death Experience?
South Africa Renewable Energy Program is Under Way →