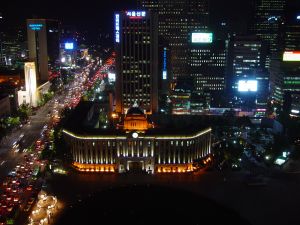 Green energy has been identified as South Korea’s next long-term export opportunity. The country has built global leadership in industry sectors through hard-headed, long-term, strategic alliances between government and the country’s largest conglomerates and a new policy, entitled Green Growth, is intended to take this global leadership into the future.

“The Green Growth policy is reshaping the industrial structure in Korea,” says Jungmin Yu, chief researcher at the Energy and Climate Policy Institute in Korea. The South Korean government announced plans in late 2011 to invest 35.5 trillion Won (US$ 30.7 billion) in new and clean energy projects and emission reduction projects by 2020.

“Green growth is intended to be a new engine for growth of the Korean economy.” The first stage of Korean development was the manufacture of low value goods such as pencils and shoes. Then they moved into the steel industries from ship-building to cars. More recently they added semiconductors and telecommunications equipment. “Now the government sees green technologies as the next global market for ‘Made in Korea’,” adds Professor Yu.

The Green Growth policy was announced in 2008 by President Lee Myung-bak as a new national development paradigm. The policy was first put into action during the financial crisis in 2009, the South Korean government invested around US$ 850 million in what it called a “New Green Deal”. The policy has been made law in the Green Growth Act, an overarching piece of legislation that coordinates a series of  energy efficiency, electricity supply, green energy, environmental protection and research and development plans.

The government’s Green Growth approach places more emphasis on growth than green, according to Jungmin Yu. Most of the New Green Deal stimulus funding was spent on large infrastructure projects including railroad improvements, river dredging and flood defence construction. The recently announced expenditures are intended to open new export markets to South Korean industry. The government predicts its investments will increase exports by 202 trillion Won (US$ 174.8 billion), while boosting domestic demand by 59 trillion Won (US$ 59 billion).

Green energy sources provide just 2% of South Korea’s electricity generation at the moment. The plan is to increase that to 11% by 2030. Korea is a peninsula. The South Korean government has set a target of 25 GW of offshore windfarms to be built before 2020. South Korea has around 200 MW of onshore wind and no offshore wind farms at the moment. The government has established a Renewable Portfolio Standard that requires big power providers to source a percentage of their power from renewable energy. They can earn double the Renewable Energy Certificates per MW/h from offshore renewable energy compared to renewable energy generated onshore.

But the big push under the Green Growth policy will be in nuclear power. Perhaps this is the area where the Korean concept of ‘Green Growth’ departs from concepts of ‘Sustainable growth’. Sustainable fuels do not come from finite energy sources. The South Korean government tends to group all low- or no-emission sources of energy as “new and renewable energy” in its statistics. Korean‘new’ energy sources include technologies such as the gasification of coal or heavy oils for consumption in combined cycle systems (IGCC). Nuclear is not counted in “new and renewable” sources in legal terms, although it is regarded as clean energy eligible for strategic R&D fund by the government.

Around 30% of the Green Growth R&D funds will be channelled into nuclear. South Korea already operates 21 nuclear reactors, accounting for just under 30% of the country’s electricity generation. The government plans to build a further 13 reactors by 2024. A new reactor was completed last year. Nuclear is to provide 59% of the country’s generation by 2030.

The investment in nuclear is also taken with an eye on exports, according to Jungmin Yu. The government sees the export of domestically developed market-leading nuclear technologies as potentially lucrative. South Korean companies recently sold four nuclear reactors to the United Arab Emirates and they have identified further opportunities abroad. The disaster at Fukushima has not dampened the South Korean government’s enthusiasm for a centralized electricity system heavily dependent on nuclear. There are other concerns besides accidents. The on-site repositories for high-level nuclear waste at existing nuclear power stations are filling up. No new location for high-level waste has yet been publicly identified, according to Jungmin Yu.