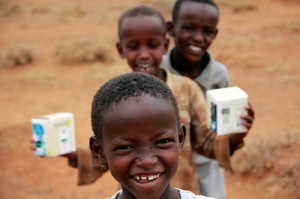 Sunlabob, a commercial solar lighting supplier based in Laos, is using public sector contracts to reach the poorest in Liberia and other  markets at the base of the economic pyramid.  This cannot be a simple commercial proposition, says Sunlabob Director Andy Schroeter. The poorest cannot cover the capital costs.

Liberia had a little over 400 MW of public and private electricity generating capacity before the start of its 14-year civil war. At the end of the war in 2003, nearly all of those power plants were out of action. A two-year looting spree to 2005 stripped out any remaining equipment, as well as transmission and distribution lines.

As the Liberian government seeks to rebuild, its targets seem modest. The country’s Energy Policy is targeting 15% electrification in rural areas and 30% in urban areas of the country by 2015.

One renewable energy supply company targeting the Liberian market for growth is Sunlabob. Since its establishment in 2000, Laos-based Sunlabob has installed more than 10,000 renewable energy systems in over 500 villages in under-developed communist Laos.  Founder, Andy Schroeter, is a German citizen who came to Laos when his diplomat wife was posted to the country. Today, Sunlabob’s 50 employees deliver services in Afghanistan, Eritrea, Uganda, Tanzania, Mozambique, the Marshall Islands and, most recently, Sierra Leone and Liberia.

Sunlabob competes for government tenders (with backing from large donors or development banks) to install larger-scale installations – typically up to 20kW – that supply power to public services, such as schools and clinics.

At the same time, Sunlabob installs a charging station that  enables the surrounding community to power up mobile phones, lights and other battery equipment from the solar array, for a small fee.

The charging station operates as a micro-enterprise. Sunlabob trains village technicians who lease the system from Sunlabob and take on responsibility maintaining it and collecting fees.

In Liberia Sunlabob won a tender against approximately 20 international companies to supply and install three solar power plant Systems (20 kW, 10 kW and 5 kW) at two locations in the town of Ganta, and at Liberia’s Rubber Science Technology Institute at Harper. The project is a part of the Liberian government’s “Lighting Lives in Liberia” program, supported by a US$2 million grant administered by the World Bank’s International Development Association.

Long-term relations with suppliers and expertise in shipping materials into difficult environments enable Sunlabob to remain cost-competitive. But Schroeter believes that price-competitiveness is not their main advantage.

“In the Liberia project and in Sierra Leone our competitors were from China, India and Europe. These guys just want to sell the material. They don’t know how to make it sustainable at the ground level. That is our advantage.  We also have project managers who go in at ground level in Liberia doing the due diligence and checking the locations. This gives us a further advantage. The people who do the evaluations often find that we are not Number 1 on price, but we really provide something that looks sustainable.”

“Initially, public bodies provide the capital for the equipment and for the training,” says Schroeter. “We deliver the contract and also create a market for our products in these markets. These guys call us after four or five years to say they need new batteries, new lamps, new inverters, whatever…”

“We take a long-term view,” says Schroeter. “I think it is the only way we can cover all costs.

Loans alone will not deliver

Schroeter does not believe that renewable energy provision can be financed through loans to people at the bottom of the pyramid.

“Microfinance works when people are improving their standard of living by buying chickens or something, but not for the basic needs of life. They have to pay back the loan plus interest. That can sometimes go up to 30%. Services for basic living do not help them to generate more income,” says Andy Schroeter.

Microfinance can succeed in very particular conditions, says Schroeter. In densely populated countries such as Bangladesh, door-to-door debt collection is viable. In Cambodia or Laos, for instance, households can be very remote from each other and in the rainy season the cost of a boat for the collectors may be more than the amount of money to be collected.

When harvests were poor in Laos, repayment became difficult. “We had two options, to allow people to pay after a better harvest or to remove the solar system. How do you explain that to lenders?” There were also problems when borrowers were reluctant to repay.

Even when microfinance is viable, it does not always provide good solutions, says Schroeter. Microfinance encourages the provision of relatively cheap solar lamps or solar home systems, he believes.  “We are creating a lot of plastic junk in Africa, India, Central and South East Asia. We should not leave these people with a loan and poor quality Chinese materials.”

Microfinance does not easily flourish where there is no established banking sector, according to Schroeter. Laos is a communist country with no real banking sector, he explains. Organizing repayment systems when there is no banking can be extremely difficult.

After experimenting with microfinance, the Sunlabob management team developed a pay-as-you-use model instead.

“The operators don’t have to go to the end-users. The end-users have to come to the operator,” says Schroeter. “Then we sell them the service and not the hardware.”

The Sunlabob solution does not remove all challenges. When entering markets where there is little central government authority and less transparity, there can be frustrations.  “We need to make it clear that we will not be involved with local wheeling and dealing,” says Schroeter. “We are not interested in anything under the table, for example on land rights or on local taxes of one kind or another. We have had long fights on this when people have wanted to tax our microenterprises that earn a couple of dollars per month. Pay tax? For what? You can imagine it is a really hard fight.”

Not all that frustrating wheeling and dealing happens locally. “Money can be available in Washington DC or Manila perhaps,” says Schroeter. “But it can take generations to move down from the top to ground level – and a lot of money is extracted on the way.”