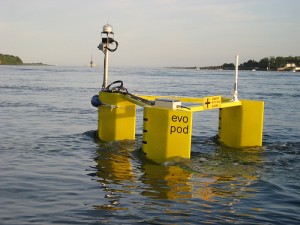 Leading engineering companies and commercial banks are putting money in marine energy projects off the coast of Scotland. The Scottish government believes the industry will be competitive with other renewable energy sources by the mid-2020s.

Tidal and wave energy technologies will make an important contribution to Scotland’s goal of generating the equivalent of 100% of the country’s electricity from renewable sources by 2020, according to Scottish Government First Minister Alex Salmond.

A small investment of £7 million ($11 million) in Aquamarine Power’s Oyster wave energy technology is an important step towards the commercialization of the technology, Salmond told a low carbon investment conference in Edinburgh in September. Aquamarine’s shareholders are the engineering group ABB and a utility subsidiary, Scottish and Southern Energy Venture Capital.

A couple of weeks earlier, Barclays Bank had announced a £3.4 million loan to part-finance the completion of the 2.4MW Oyster array, located at the European Marine Energy Centre, off the Orkney Isles in the North Sea. Aquamarine’s goal, according to CEO Martin McAdam, is to start delivering the first pre-commercial marine energy array in Scotland in 2014.

Aquamarine Power is not the only company receiving fresh investment. Siemens announced at the start of November that they have increased their stake from 10% to 45% in MCT – the company that developed a 1.2MW tidal turbine in Strangford Lough, Northern Ireland.

Open Hydro installed the first prototype tidal turbine off the Orkney Isles in 2006. A 315kW Oyster wave energy device began trials at the much the same time. The Strangford Lough turbine went into operation in 2009. In 2010, Pelamis Wave Power installed their 750kW device in Orkney. Six companies will have installed full-scale wave power devices off Orkney to prove concepts in real sea conditions by the end of 2012.