Initial results from the trucks fitted with ‘Dearman’ transport refrigeration units are promising, according to the company. The Dearman systems cooled their trailers more quickly than conventional diesel-fuelled refrigeration units. Larger scale European and international trials are expected to begin during 2016. 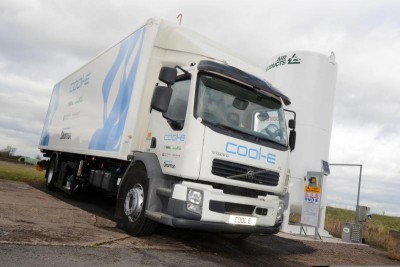 Diesel-powered transport refrigeration units are not subject to the same levels of emissions regulation as vehicle engines. But there is growing demand for units with better environmental performance. A diesel transport refrigeration unit can account for up to 20% of a vehicle’s total fuel consumption. They can emit up to six times as much NOx and 29 times as many particulates as a Euro 6 diesel engine. Many of the refrigeration units are fitted to delivery vehicles operating in citie centres. Then there are the problems with refrigerants. If current trends in refrigerant usage continue, hydroflourocarbons will be responsible for nearly half of the global greenhouse-gas emissions by 2050.

Around 200 million tonnes of perishable food are lost annually in developing countries because of the lack of an adequate cold chain. In markets such as India and China, static and transport cold chain is seeing annual growths of more than 25%. At present, China has an estimated 66,000 refrigerated vehicles to serve a population of 1.3 billion. France, by contrast, has 140,000 refrigerated vehicles for 66 million people. Authorities in India are taking an active interest in Dearman’s potential.India, where just 4% of fresh produce is transported in refrigerated vehicles, forecasts investments of more than $15 billion on its cold chain over the next five years.

The Dearman concept has evolved over 30 years. Peter Dearman, a self-educated engineer who left school at 15, saw his first nitrogen-powered car on television = during the 1980s. e set out to build an engine of his own, but – while it worked – its efficiency was very low.

By the end of the 1980s, he had abandoned the project f to focus on other things. He developed a portable resuscitator that has become standard kit on many ambulances around the world. But, by 1990, he had returned to the nitrogen-fuel problem. The breakthrough came and by the early 2000s he had a working prototype.

In 2005, Peter Dearman partnered with Toby Peters, now a professor in power and cold economy at Birmingham University’s Energy Institute, to exploit their innovations. They chose not to concentrate on the piston engine initially. Instead, they identified energy storage as the most marketable application for their  liquid nitrogen-fuelled technology. In 2011 the partners co-founded the Dearman Engine Company.

Dearman’s innovation was to add proprietary heat exchange technology to a piston engine. In the Dearman engine, heat exchange fluid (a mix of water and glycol) is pumped into the piston cylinder and cryogenic nitrogen is added. Once the nitrogen comes into contact with the warm fluid, it begins to absorb heat and expand at a near-constant rate.  That consistent expansion drives the piston at a consistent rate, greatly improving the efficiency of the engine. 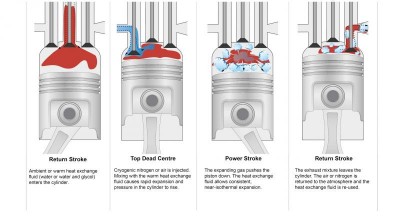 When the piston is fully extended, the mix of gas and fluid is exhausted. The nitrogen dissipates into the atmosphere while the heat exchange fluid is reclaimed, reheated and reused. The only emission from a Dearman engine is cold clean nitrogen that can be used for cooling purposes.

The Dearman company claims a number of benefits compared to other zero or low carbon technologies. Unlike today’s battery technologies, liquid nitrogen engines can be refuelled very rapidly.

Liquefaction is a mature technology. In the UK and many other countries a nationwide liquefaction infrastructure already exists to produce liquid oxygen – creating large amounts of liquid nitrogen as a by-product.

The Dearman Engine Company is also working on a diesel/liquid-nitrogen hybrid powertrain for large vehicles that they expect to be considerably less expensive than diesel/electric hybrids.

In the Dearman design, heat from the diesel-fueled engine warms the heat-exchange fluid for a Dearman engine. Dearman believes that the hybrid could reduce diesel consumption by up to 25% in commercial vehicles. 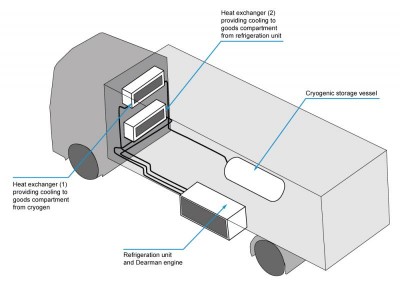