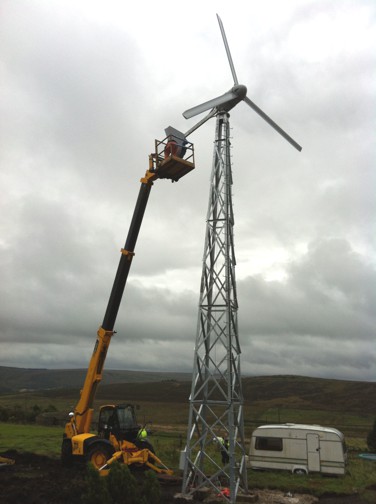 There can be many unexpected twists and turns before an English wind energy project succeeds, as the Blackshaw Environmental Action Team discovered. Wind turbines are a proven and fast-maturing technology. Small wind turbines are relatively cheap. With feed-in tariff payments, they should provide an excellent return to investors. But…

Local food schemes, nature conservation and bird-watching walks are just some of the activities supported by the Blackshaw Environmental Action Team (BEAT) in the Pennines mountains of West Yorkshire, England. About three years ago, the group decided to generate their own renewable energy.

Renewable energy was attractive, says Team member Finn Jensen, because it could generate income for other community projects.

They started by looking for micro-hydro opportunities on the many fast-flowing streams and rivers in the area. Part of BEAT’s brief is to win hearts and minds in the local community to more sustainable ways of doing things. Micro-hydro would be a less controversial way forward than the other obvious source of power, wind turbines.

“Unfortunately, we wasted a lot of time negotiating with local landowners who had suitable sites for hydro developments on their land,” says Finn. BEAT were offering a deal where they would undertake much of the planning for the hydro plant and would raise the funding for it. The landowner would receive the power generated for free, while BEAT would receive the feed-in tariff.

None of the potential micro-hydro schemes have progressed. “Some of the landowners felt they were too old to start something like this,” says Finn. “Some were interested but backtracked later.” There were some who decided they would rather do it themselves and gain the income from the feed-in tariff as well as the free electricity, but they have had problems raising the finance. Other potential sites proved inaccessible to heavy machinery.

The group knew that the region had excellent wind conditions. They decided to switch their efforts to a wind turbine. “WE consulted with the community and talked to the local Planning department,” says Finn. “The feedback from both was that a small turbine of a maximum height of 12 metres was all that would be acceptable.

“That was a disappointment. But we thought that if we proved the idea and money started to flow into local projects that we could get the community to agree to a bigger turbine, and then the Planning department might be more amenable. That’s the long-term option .

After a public information campaign, raising finance from the public was not a problem. The Pennine Community Power cooperative was established and the Team were delighted when 65 shareholders came forward, offering between £250 and £1,000 to be a part of the scheme.

BEAT received a further boost when their wind turbine project won £30,000 Lottery funding under the Village SOS scheme. The 10kW wind turbine was expected to cost just £58,000, while generating around £7,500 per year. In its first 20 years, the project was expected to generate over £80,0000 for community initiatives.

Once the funding was in place, raising the wind turbine proved equally easy. But BEAT/PCP received its first major surprise when it attempted to connect the new wind turbine to the grid.

A few years before, three households in the village had proposed erecting three wind turbines in the same area. The local Distribution Network Operator had offered the householders free grid connections. BEAT/PCP had assumed that they would also be offered a free connection. Unfortunately, the DNO had changed its mind. Now, it demanded £16,000 for the grid connection. That was something of a shock.

There were rumblings that the cooperative would not receive feed-in tariff from Ofgem for their renewable electricity. But, at first, that threat seemed to have disappeared.
“We got grid connection on 30 October last year and when we received a feed-in tariff payment of £1,600 for November and December, we thought everything was hunky dory,” said Finn Jensen.

Then news came through that Ofgem would stop further payments. Ofgem had decided that the Lottery grant constituted state aid to the project, nullifying their right to feed-in tariff.
“The whole business model is dependent on the FiT,” says Finn. “One option was to pay the £30,000 grant back and to raise an alternative £30,000 from shareholders, but that would mean less money available for community projects.

Apparently, Ofgem had published a change in their procedures on their web site during 2011, but very few people had picked up on it. Not only had the experts that BEAT had consulted with not heard of the new Ofgem policy, even the government’s Department of Energy and Climate Change seemed surprised by the new approach.

From discussions with Ofgem, Pennine Community Power established that only the grant funding spent directly on the wind turbine (about £9,000) was a problem. Grant money spent on the grid connection or other support activities would not need to be repaid.

In the meantime, an organisation called Carbon Leapfrog, who believe there are dozens of groups also affected, are looking at ways of resolving this issue.

Now the members of PCP must decide on the best route forward – repayment of £9,000 and speedy renewal of feed-in tariff payments, or possible involvement in some form of class action.

BEAT have also pressed on with other plans. They have proposed a 9kW solar PV system for the roof of a local church. The proposal has split the church’s congregation right down the middle. Some don’t want the solar system on the church roof for aesthetic reasons.

It seems that the need for renewable energy is not accepted by everyone. In fact, some of the older community reject the scientific evidence, declaring they don’t believe in climate change at all.

The wind turbine is performing better than expected and BEAT are busy sharing their experiences with other communities. They also participate on a local information-sharing panel with academics, the private sector, community representatives and representatives from public services and the local Calderdale Council. They are organising a conference on 14 October to galvanize other local businesses, organisations and individuals, using the experiences in Blackshaw as a showcase.

“There has been a lot of work to get this one small turbine up with so many obstacles on the way,” says Finn Jensen. “The reality is that if we had not been so stubborn we would never have got there in the face of the obstacles. It was a steep learning curve. “

For more information about BEAT: www.blackshawbeat.info and about PCP: www.powerinthecommunity.org.