A novel 5MW/15MWh liquid air energy storage system is nearing completion at a landfill waste site near the city of Manchester, England. The demonstration system will be connected to the UK grid to provide balancing services. 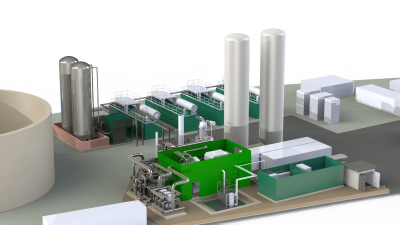 The system takes waste heat from the jacket around GE Jenbacher landfill gas engines and uses that waste heat to boost the expansion rate of liquefied air to power a 5MW GE turbine.  Liquefied air will expand around 700 times in volume while turning back into a gas.

Sufficient liquid air can be stored on the landfill site (owned by the waste management company Viridor) to run the 5MW turbine for 15 MWh. At present, the liquefied air is imported to the site. An air liquefaction plant may be added at a later stage.

“The technology does not need the waste heat,” says Matthew Barnett, Business Development Manager for Highview Power, the company behind the liquid air energy storage system. “It functions at about 55% to 60% round-trip efficiency on its own [Electricity to liquefied air to electricity]. If there is waste heat available it improves the efficiency.

“The jacket water we are taking is fairly low temperature. Because this is a demonstration facility we wanted this to be as soft and as un-intrusive a fit as possible into the existing plant. The boiling point of air is extremely low. The ratio between the addition of heat and improvements in round-trip efficiency is not a straightforward question. But, roughly, if you have waste heat at 100 to 300 degrees you will be in the region of 60% to 75% round-trip efficiency.”

From tanks of liquefied air through to the cold air that exits the turbine, the system is a combination of tried and tested technologies, says Barnett.

“Looking at the chain of technology, you start with industrial gas technology – basically evacuated tanks and insulated tanks. Next you move to technology developed for the liquid natural gas industry, predominantly pumps which pump the liquid air to high pressure. Then you move to high-pressure heat exchangers that come from the oil and gas industry. And, again, all of this is readily available on the market. By the time you get to the gas expander, you are no longer dealing with a cryogenic system, it is just a high-velocity gas that is being expanded and turned into mechanical power.

“The actual technology on the turbine side is pretty much off-the-shelf. There are areas where the efficiency could be improved by using different materials, changing things such as guide vanes or by tweaking the hardware. But for the cost of modifications to get a few percentage points increases on the round trip efficiency, it is probably not worth doing on this first generation. “

Four years ago Highview Power built a 350kW/2.5MWh pilot version of the liquid air energy system. Since then, they have been testing with the pilot, including performance testing for the US PJM wholesale electricity market.

At 2 to 5 minutes start-up, liquid air energy systems cannot compete with flywheels and batteries in the provision of start-up services to the grid.

For the past 18 months, Highview Power has partnered with GE Oil and Gas on the adaptation of a GE 5MW gas turbo generator to run on liquefied air. They see potential markets for this technology at within peaking stations. “There is a natural fit between energy storage and peaking stations,” says Barnett. “By co-locating the system with gas turbines you get much faster start-up times plus use of the waste heat. You are getting more electricity out for the same fuel in and you also have the facility to absorb electricity off the grid.”

However, Matthew Barnett expects there will be more interest in liquefied air energy storage at higher power outputs that 5MW and with greater duration than 15MWh.

The 5MW Manchester project is being funded to the amount of €11.3 million by the UK government. To keep costs down, the smallest turbine in its class was chosen to demonstrate the concept. A lot of the work that GE is undertaking is concerned with optimising machine selection and scale for this application. Cost management is also the reason why a liquefaction plant has not been added during this first phase. Liquefaction technology is mature and easily available. Adding liquefaction would not have added any value to the demonstrator.

The technology is best viewed as a competitor with medium-scale pumped hydro without the geographic restrictions that come with pumped hydro.

“Although that is our sweet-spot for the technology, it can certainly be scaled back to the tens of megawatts in terms of energy storage,” says Barnett. “The main play is transmission level, but you could put this at various nodes on the grid and use it for distributed energy as well.”

Highview Power is currently undertaking development work in parallel with other partners. At the end of 2014, the company signed a licence agreement with the US clean coal technology provider Advanced Emissions Solutions. The Denver, Colorado based company invested £1.75 million in Highview. The licence agreement is for non-peaker plant storage applications in North America.

California is one of the first states in the US with concrete plans for an energy storage market. The State Congress has mandated the installation of 1.3GWh of energy storage on the grid by 2020.

“California is certainly a strong contender to be the first market at scale,” says Barnett. “The complication is that the market is saturated with battery technologies and it has always been led by battery technologies. Introducing a disruptive technology will always be a catch-up game there.”

“Those can be very difficult markets because the core business of the industrial company is always going to be the delivery of its product – food, beverages, cement steel…,” says Barnett. “Putting an energy storage system in the middle of that will inherently introduce risk.” But there is opportunity. These largescale energy consumers are under pressure to improve the energy efficiency of their plants, to reduce their emissions, and often to reduce their off-take of power from the grid. Adding the utilization of waste heat to that list can deliver a double win.

According to recent research published in the April 2015 edition of Nature Climate Change by the Stockholm Environment Institute, the cost on average of an electric vehicle battery pack is around $410 per kWh. However, the market leaders at Tesla Motors and Renault-Nissan are achieving averages of around $300 per kWh and the authors conclude that economies of scale are likely to drive battery costs to $200 per kWh in the near future. However chemistry improvement may be necessary to go much below that. Above ground compressed air energy storage ranges from $390 to $410 per kWh, according to the US State Utility Forecasting Group.

Where high levels of power are needed over a long duration, the Highview liquid air energy storage system could deliver power at $250 per kWh to $200 per kWh, perhaps even going down to $150 per kWh, says Barnett.  Those kinds of costs would make liquid air energy storage competitive with all but the cheapest and most efficient pumped hydro systems. Highview Power provide a cost estimator on their site with a range of variables. (http://www.highview-power.com/cost-estimator/)

He also claims costs can fall further. “A lot of the chemistry for batteries has been around for a long time. There are few areas where they can improve efficiencies or take costs out,” claims Matthew Barnett. “With out technology you have both of those opportunities to improve efficiency later and to bring costs down, especially as more are built and they are built bigger.”

The technology can be especially effective where there is both waste heat and waste cold, says Barnett. Europe imported 33 million tonnes of LNG during 2014. Considerable energy is required for the liquefaction of that natural gas before transportation. When the LNG is re-expanded for entry to the gas network, less than 50% of the cold – so expensively produced – is used for any other purpose. Instead, it is simply allowed to dissipate. Where LNG is stored in its liquid state, vapours (known as ‘boil-off gas’) are regularly vented off and burnt creating waste heat.

The cold from LNG re-expansion can be used to liquefy air while the boil-off gas could be used as a heat source to speed up the expansion of the liquefied air through the turbine.  A liquid air energy storage system co-located at an LNG import site could deliver more electricity into the grid than it  consumes. Efficiencies of between 100% and 150% would be possible, says Barnett.

Barnett says it is feasible that more than one project might get the go-ahead over the next two years if the 5MW project can demonstrate the results they hope for.