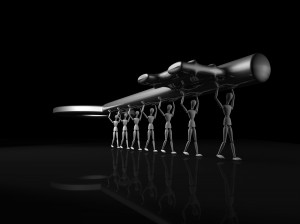 A top executive is probably not part of this team -Photo: Sachyn/stckxchng

It is hard to find a top CEO who does not support the idea of teamwork and collaboration; but it’s harder still to find one who genuinely works as part of a team. “Collaboration at the top is a myth,” says Celine Legrand, an assistant professor in the field of human resources management Audencia Nantes School of Management in France. Her research finds that top executives almost never work as a real part of teams.

Legrand studied top teams in successful Canadian companies, and found that just 6% of top executive teams genuinely worked together on big decisions. The majority of CEOs paid lip-service to teamwork, minimizing consultations, restricting information flows to their top fellow team members, and ultimately making the final decision alone. In 21% of cases, the CEOs made decisions entirely without input from management. Although these CEOs were mostly excellent decision makers, the lack of a truly collaborative process still leaves their firms vulnerable: “If the CEO fails, then clearly the boat will sink,” Legrand says.

It’s a style of leadership that undermines the motivation of senior and middle managers. “There is a real human cost,” says Legrand. “People suffer when they are managed this way.” This trend is reflected in occupational health statistics, which suggest that between one third and one half of senior managers suffer from stress and burn-out. “People want to work in organisations where they are trusted and where there is real exchange,” says Legrand.

The autocratic style of leadership is also becoming increasingly ill-suited for today’s complex business environment. “Dealing with complexity requires creativity,” says Legrand. She adds that creativity flourishes in an atmosphere of collaboration and diversity and is weakened by autocratic leadership.

Teamwork in Business Education at Audencia
What can business schools do to encourage future leaders to be more collaborative? While corporate responsibility is increasingly being included in business school curricula, too often it is an elective rather than a core subject. Audencia Nantes takes a more holistic approach to business education, making global responsibility a core value of the school – a value that informs everything they do. At Audencia, the study of leadership goes beyond short-term performance and looks at the longer-term impact on managerial health and wellbeing.

Ultimately the most valuable teamwork lessons are practical: “In the MBA programme, students are all at the same level,” says Legrand. “They are all leaders who have to work together. It’s a difficult journey for them, because they’re used to leading teams. It’s not always easy. It’s about questioning your style, trying to see how you could improve as a leader according to what you’re learning as a team player. Students really get a lot from these kinds of experiences.”

Though a decisive leader seems like a safe bet for hiring committees, Legrand’s research tells us that appointing an autocratic CEO is a risky strategy for leadership succession and management wellbeing. In a competitive global economy, firms must make the most of all their top-team talent, and it is the responsibility of business schools to make sure future leaders understand the best ways to do this.

Gender Differences, National Differences
In her research, Legrand also found that top CEOs tend to surround themselves with similar people. As a result, women are less likely to be part of the inner group of “yes men” close to male CEOs, even as women increasingly move into senior management positions. Although there were no female CEOs in the most autocratic group Legrand studied, she did not find that women are necessarily more collaborative in their leadership style than men. What is distinctive about female leaders is a greater desire to involve people. This means that, even if women can make a decision themselves, they recognize the importance of involving others in the decision-making process.

In contrast to her native France, where leadership tends to be more overtly hierarchical, Legrand found that the North American CEOs were perceived as open, accessible, and grounded, with strong communication skills. When it came to organising their work, however, their style was just as autocratic as in more hierarchical cultures.

The study looked at top teams in 33 organisations, including nongovernmental organisations, small and medium-sized enterprises, and multinational corporations, ranging in size from 55 employees to many thousands of staff members. The results were remarkably consistent across the varied sample: CEOs understand and advocate the need for collaborative teamwork, but they don’t always practice it themselves. This is just one of the reasons why Audencia’s focus on fostering teamwork and meaningful collaboration among future business leaders is such a critical component of its overall educational philosophy – and its unique profile as one of Europe’s leading business schools.