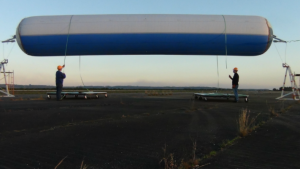 A 16-meter long helium-filled cylinder will rotate creating considerable lift force. A ground-based winch-generator will convert the lift force into electricity.  Once the cylinder has reached its maximum height, its rotation is stopped and the module descends to its starting position.

During  trials in April 2015, the airborne module will fly below 500m of height . But the intention is to go much higher to take advantage of the high altitude winds that are considerably stronger and more persistent than the winds driving today’s wind turbines.

“We may find that there is sufficient wind at an upper altitude limit of 1km to generate sufficient energy in a cycle,” says Rei Fernandes from Omnidea, the Portuguese company behind the idea. “If that isn’t enough, we can go higher.”

During its electricity generation phase the airborne module will typically climb at one third  of the wind speed and be recovered at double that speed . Within certain limits, lift force increases with increasing wind speed and/or the faster the cylinder is rotated. At its maximum, The traction force, on the cable connecting the rising cylinder to the winch-generator, can be above 1 Ton if winds are at least 8m/s.

The cylinder is also filled with helium, which provides buoyancy lift and makes the airborne module just slightly lighter than air. That will keep it airborne when it is near to the ground in low winds.

According to Fernandes, the 16m long airborne module could deliver an average 10kW (mechanical power) across one complete (generation phase plus  retrieval phase) cycle.

For this technology the maximum power generated, divided by the average power, is between 2.5 and 3 (i.e. the “capacity factor” is between 33% and 40%) .

The airborne module is extremely stable. It smoothly self-aligns to any changes in wind direction, remaining perpendicular to the prevailing wind direction. The system is designed to operate in winds up to 25 metres per second. In more extreme conditions, it can be brought down to a low height for a time.

With its ground-based winch and generator, the airborne module avoids some of the complications faced by tower-based wind turbines. The systems can be sited at a wide variety of locations – including at sea.

A business case has been produced for the system by one of the partners in the project, Portuguese utility EDP, that shows the cost of energy from the system is competitive, according to Fernandes. The capital costs of the components that make up the system will be low. For instance, the material for the airborne module costs around €15 per meter squared, the cable less than 10€, per meter, per Ton of force, and the winch should cost less than €75,000.

A future aim is to stack cylinders (airborne modules) in groups (above and below) to create multi-hundred kW systems. The team is also designing and modelling systems where two sets of airborne modules run in parallel so that power is generated continuously. “As yet, this is untested experimentally but they have done calculations and these will be developed in future,” says Fernandes.

The force that generates 95% of the cylinder’s lift is the ‘Magnus effect.’ It is the Magnus effect that bends a spinning soccer ball around a wall of defenders. And the Magnus effect can lift a back-spinning golf ball high into the air so that it eventually drops straight down.

The Magnus effect was first described during the Nineteenth century. In the Twentieth century a series of attempts were made to fit aircraft with rotating cylinders to exploit the lift effect – with varying success.

On the High Altitude Wind Energy System, the cable holds the lighter-than-air cylinder in the prevailing wind. Rotating the cylinder causes a layer of air around the cylinder to rotate. (Rotating a ball with a kick has a similar effect.) 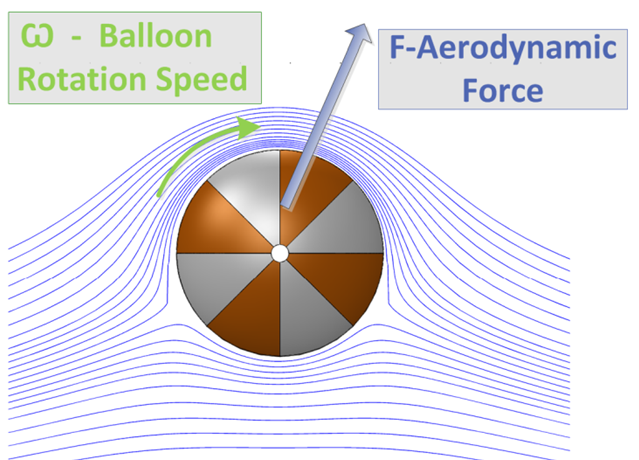 Below the cylinder, the rotating layer of air and the prevailing wind meet and oppose each other. That creates an area of higher air pressure.  Above the cylinder, the rotating air and the prevailing wind move in the same direction. That results in lower air pressure. The higher pressure below and lower pressure above create an aerodynamic lift force – similar to the lift force on an airplane wing.

The team hit on the idea of the Magnus effect after experimenting with aerofoils. Over a series of trials, the viability of the Magnus effect as a source of power generation has been proven. Less than 10% of the cycle average power is needed to rotate the airborne module. In winds as low as 4 to 7 metres per second, a cylinder rotating at 40 to 70 rpm can create a force which is 6 to 10 times greater than the force experienced on the cable without Magnus effect (e.g. during recovery phase). To date, a cylinder has been rotated at 55 rpm, but the motors are capable of driving the airborne module at up to 100 rpm.

Lessons have been learnt during the design and development phases. The research team broke new ground in computational flow dynamics when modelling the system, according to Fernandes.

The cylinder comprises a gas-tight bag within a UV-protective layer, surrounded by strong netting. It is mainly constructed from thin polymer film materials and is cheap and easy to replace.  Struts within the airborne module house the control electronics and two high voltage electric motors that deliver the rotation, one at each end of the cylinder. The motors are specially designed and built by the team. Power is delivered via the winch cable.

The cable was one of the most difficult elements in the system to design. It has to perform a number of functions while subject to high levels of stress. In its final form, it will probably deliver power to the rotating motors, data to the electronic control systems and helium top-ups to the cylinders. It has to withstand the stresses during ascent and descent, reeling and unreeling. At the same time, weight has to be minimised. An airborne module may be dragging a cable of between 1 and 2 kilometers in length.

The latest version of the cable weighs significantly less than half a kilogram per metre. It has a minimum breaking strength of 90 KiloNewtons. A swivel has been designed that connects the airborne module to the winch cable.

Supplying top-up helium to the airborne module has been tested, but helium supply was not incorporated into the cable during proof of concept trials in 2014. A sample cable combining helium, data and power provision has been manufactured but has not yet been tested.

In order to conduct electricity, the cable has a copper core. “Our concern is bending fatigue,” says Rei Fernandes. “Each time we reel in and reel out, we bend the copper conductors within the cable. The target is to have several hundred thousand or even one million cycles before the cable needs replacement. But we have not reached that point yet. Our cable has survived pretty well intact but we have not been operating for long periods of time.”

The life of the cable has implications for the cost of the power produced by the system. “The cable will probably need to be replaced every two to five years, depending on how we operate,” said Fernandes. “We are working on ways of minimising wear at the moment.”

Similarly, the life of individual components was not tested during the proof of concept trials. That will need to be fully understood before the system can be considered for commercial operation. Alternative cables will also be tested, such as the use of fibre optics within the cable or splitting functions across two cables.

Maximising the efficiency of the winch is one of the development areas that will be looked at during 2015.

“The principal challenge now is to have it operating for long periods,” says Fernandes. “That means we have to operate overnight and we have to fulfil air safety regulations. The regulatory system is not clear as we are neither a typical tethered system nor an aircraft. Do we need to illuminate the cable or have transponders in the region? If the cable should break – we don’t think it will but we have to cater for that eventuality – we have to be prepared.

“We need to understand the characteristics of the materials when we run for long periods. Factors affecting the durability of the system will be studied during this year’s trials, such as the rate of helium leakage.

“The system is modular. A wind farm could consist of a number of units in one area so that we can generate 200kW, 250kW and then eventually 1MW. Once we are confident that we have all the data we need and we can control it the way we would like to, it is easy to scale up.“

Power generation may have been the starting point for this system, but there may be other applications that offer more immediate opportunities with fewer technical barriers.

The stability of the airborne module could allow the system to act as an earth observation platform that is considerably cheaper than satellites. Just six ABMs carrying GPS-style navigation aids could provide coverage for shipping across the entire arctic region, according to Fernandes. That might mean operating ABMs at altitudes around 4km (or higher) rather than the 1km to 2km envisaged for power generation applications.

Funding for the next phase in the team’s research is actively being sought.

“Our focus may shift a little depending on the source of funding but we will definitely pursue the power generation side,” says Fernandes.

← Nuclear Power for the UK – Does it Make Sense?
Storing Power as Liquid Air →