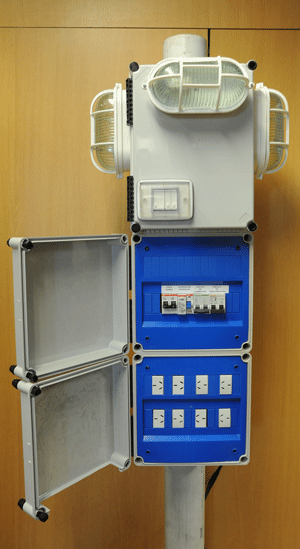 A compact, safe and quick-installation system for the electrification of slum dwellings has been developed in Argentina. Professionals from a number of Argentinian electrical associations and standards organisations came together to develop MICEM (‘Módulos de Instalación Concentrada de Electrificación Mínima’) which translates as ‘Compact Installation Modules for Minimal Electrification’. The project included the design of a MICEM standard.

The MICEM electrification unit sits on a single steel pole, 1.80 meters tall. It comprises three sections. At the top, there are three highly robust and protected lights, offering the family three levels of illumination. The bottom section is a board capable of taking eight sockets. The sockets sit a minimum of 90 centimetres above floor level on the properly-earthed pole. That should help keep electrical appliances away wet or flooded floors. A further 70 centimetres of the pole is buried and cemented beneath the floor level, giving the MICEM unit a very solid foundation.

It is difficult to know how many slum dwellings there are in Argentina, because there is no central register of these informal buildings. Well over half a million families live in shanty towns in the Greater Buenos Aires area alone.

In a country where electrification is over 97%, a lack of access to electricity increases the social and economic marginalisation of already highly marginal groups.

In reality, large numbers in the shanty towns of Argentina do have some kind of access to power. Many neighbourhoods are supplied by power distributors using collective meters, without any measurement of the electricity consumption of individual families. The relevant local municipalities cover the costs of energy supply.

Slum-dwelling families with access to Argentina’s 220-volt system often run a surprisingly large number of electrical appliances. It is not uncommon to find large numbers of light points and sockets, a television, a refrigerator and a fan within a single residence. Yet, without proper earthing, a differential switch or circuit protection, all of these installations will be unsafe. There can be serious risk of direct contact with electrically loaded points and surfaces. There is also increased risk of fire.

Location can cause further problems. Shanty towns tend to be built on marginal land, such as flood plains and hillsides that can turn into cascades during heavy rain Construction methods are pretty rough.  Buildings are crowded together. Construction standards are non-existent.  Drainage systems are haphazard. Unsurprisingly, leakage and flooding are extremely common problems. Construction materials such as corrugated metal sheets, bits of plastic and wood make these buildings entirely unsuitable for traditional methods of electrification.

Yet, electrification is the bedrock needed for all development according to Benoît Dôme, who leads on the International Copper Association’s slum electrification programme. All other applications — street lighting, water supply, schools, hospitals, etc. — require electricity, argues Dôme.

In 2007, ENRE, Argentina’s Electrical Regulation Body, published a Guide for the Design of Power Lines for Category A (poor quality) Dwellings. The guide laid down five ‘Electrical Safety for Everyone’ goals: reducing the number of accidents caused by unsafe electrical installations; ensuring the electricity installation regulations are implemented; the development of a standard for low voltage and indoor installations in poor neighbourhoods; enhancing the social inclusion of the poorest; and broadening the geographic coverage with safe electrical installations.

The MICEM unit was designed with these goals in mind. The MICEM programme included the design of a specific standard – IRAM 63066/AEA 90364-7-779 – for the installation of electric power to poverty-stricken areas, taking account of all current building regulations.

Achieving compliance with IRAM/AEA standards while keeping the costs of materials down and minimizing the size of the unit was a pretty major challenge, according to Ing. Pablo Paisan, manager of IRAM, the Argentinian  Standardization and Certification Body. It required a lot of pioneering work. There were very few international studies of this kind of equipment for the developers to draw on.

Local participation and local empowerment, in keeping with the ENRE goals, are an important part of the MICEM project. Installation of MICEM units does require trained electrical technicians. But, says Pablo Paisan, the original idea was that local people would be trained as technicians to install and maintain MICEM units in their area.

MICEM units are designed to withstand rough handling during both installation and operation.

The MICEM units can provide permanent solutions or they could be used more flexibly. MICEM units can serve as a temporary solution where slum-dwelling families are facing a wait before their housing is upgraded. The MICEM unit can be easily removed once the upgrading is completed. Then it can be quickly reinstalled to serve another household elsewhere.

While considerable effort has been made to minimize the cost of MICEM units, they are still a major investment for authorities wishing to install them. While there is no definitive cost available for a MICEM unit, a two-year-old estimate costed the units at around US $500 each.

Whether or not that level of expenditure is a disincentive for potential supporters of the MICEM programme is unclear. At the moment Pablo Paisan knows of no plans to produce MICEM units in large numbers.

The intention is that the costs of MICEM installations should not fall on the poor families themselves, but would be covered by the national, provincial and municipal authorities serving these poor communities.

The groups and associations behind MICEM comprise: CADIEEL, the Argentinian Chamber of Electronic, Electromechanical, Lighting, Telecommunications, Computer Science and Automation Control; APSE, the Association for the Promotion of Electrical Safety; AEA, the Argentinian Electrotechnical Association; IRAM, the Argentinian Standardization and Certification Body; and ENRE, the National Board of Electricity Regulation and other major companies in the electricity sector, manufacturers and power distribution

← Storing Energy on Rail Tracks
Nuclear Power for the UK – Does it Make Sense? →