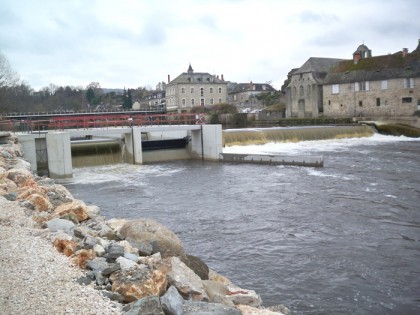 The UN Industrial Development Organisation calculates that 87% of Western Europe’s economically viable small hydropower capacity has been exploited. In Northern Europe that figure rises to 95%. Yet, innovative companies in niche segments are seeing opportunities in hydropower – and good growth.

MJ2, a small French hydro turbine manufacturer increased its turnover in 2014 by 44% to €10 million. According to Chief Executive Marc Leclerc, they are developing plans to increase their production by 33% from 15 turbines per year to 20 in the next years.

MJ2’s ‘Very Low Head’ (VLH) (patented in 2003) takes, a reverse approach to the traditional economics of hydropower. Most Kaplan turbine designers control production costs by minimizing the diameter of the impeller on their turbines. To ensure steady and efficient turbine performance, large and expensive intake and outlet infrastructures must be built. At heads below 3 meters, the required civil works are so expensive that traditional Kaplan systems are rarely economical.

The VLH concept seeks to minimize capital costs by reducing the size of the intake and outlet infrastructure. It achieves that by maximizing the diameter of the impeller, while housing it within a simple self-supporting structure. MJ2’s five products vary in diameter from 3,15 meters up to 5 meters.

Large impeller diameters and low heads mean that the turbines turn at low speeds (less than 41 rpm) and the speed will be variable. The turbine has eight adjustable blades that can alter to maximize efficiency in changing river conditions, or to close off the flow through the channel. The entire system has a lifting mechanism that allows it to be raised from the river for easier maintenance.

Power quality issues are managed using a frequency converter that allows grid-connected VLH to maintain a high quality 50- or 60-Hz signal while turbine rotation speeds modify to changing river conditions. The power capacity per unit ranges from 100kW up to 500kW with flow rates starting from as little as 2 m3 per second.

The low speeds of the VLH have an added environmental bonus. They allow the safe migration of fish through the turbine. The French authorities recently verified the ‘fish-friendliness’ of the VLH range. That is an important endorsement in developed countries where river sustainability is given a high value.

Cousin to the wind turbine

The VLH is a cousin of the wind turbine, says Leclerc. The costs of installation for wind turbines and VLH are very similar. Price per kilowatt varies according to the available head, the configuration of the VLH and the infrastructure required. But typically it ranges from €3,000 to €6,000 per kW.

The VLH – with its simple, robust mechanism, has lower operational costs and are more reliable than wind turbines. They also beat wind turbines on load capacity. A small VLH machine will typically have a load capacity in excess of 50%. On the other hand, VLH are tied to the geography of the river. The economies of scale that are available to wind turbines by connecting large numbers to a grid at one location are not available for VLH.

The VLH generation unit is fully submerged below the surface of the river when in operation. That allows for silent operation and reduced visual impact. Combined with its compact infrastructure, these features have opened up opportunities for VLH where compactness, noiselessness and visibility are important – such as in inner cities. Here, the VLH is attracting the interest of customers even when heads exceed 3.5 meters and traditional Kaplan turbines would generate electricity more economically.

In the centre of the city of Grenoble in the French Alps, for example, MJ2 recently installed a group of four VLH turbines with a combined generating capacity of 2MW on a river with a head of 4.2 meters. The challenging river conditions required the structures of the Grenoble VLHs to be reinforced – including the shaft line, the bearings and the blade mechanism – pushing costs higher.

The economics become more attractive when VLH systems can be piggybacked onto existing infrastructure. The company is commissioning a 300kW VLH in the intake channel of a large-scale hydro plant in France.  There are also opportunities at the outlets of large hydro plants. It has been common practice to retain a few meters of head at the exit of Francis machines to protect the machinery against floods. Next year, they will install a VLH to take advantage of just such a 2.5 meter drop at the exit of a Francis machine in Tahiti. Large weirs or river or canal locks provide similar opportunities to install VLH without major investment in infrastructure.

MJ2 is, of course, not the only company in the market looking to exploit this niche. Voith Hydro’s small turbine division recently invested in the expansion of its Austrian manufacturing centre. They also see opportunities to install run-of-river systems to exploit existing infrastructure built for largescale hydropower stations.

Another opportunity to piggyback VLH within existing infrastructure is in the cooling systems for large thermal power plants. These plants use millions of liters of water – often sea water – and have a drop of two or three meters at the restitution level. Generating electricity from warm salt-water presents challenges for MJ2, but the company has been involved in several pre-feasibility studies to consider the issue. And Marc Leclerc calls it “a possibility’ for the future.

MJ2 and its sister companies have also developed an interesting application for the future – islanded microgrids powered by a single VLH. “The isolated network will function by using the frequency converter in a very peculiar way,” says Leclerc.

The frequency converter would be used to instantaneously regulate the system’s power output in response to changes in demand from the passive islanded low voltage network. That opens up the possibility of establishing microgrids in developing countries based around a VLH where there is no possibility of attachment to a larger grid.

The system, like many other smartgrid solutions, has been modeled. Now MJ2 would like to test it in the field.

“We are looking for a demonstration site close to our base in France where we could install our first system. It is not easy to find a place in Europe where an isolated network makes sense. We don’t wish to be making tests 10,000km from home.”

At the same time, while islanded networks with a VLH at the centre might be an attractive technical solution for off-grid communities in remote parts of developing countries, the feasibility of the investment is often questionable.

This is a mature technology, he adds. What would really bring the cost of production down is volume production. That has been the focus of most of MJ2’s development efforts.

Since 2011 MJ2 has invested in the capability to cast components and increased standardization across their full range. They have industrialized their generator manufacturing, created stamping tools to stamp out magnetic sheet steels.

“Our machines deliver an efficiency of about 80% – water to wire. Improving this value would require a lot of R&D and would probably add considerable expense.” says Leclerc. “Our idea is to try to make it cheaper and easier to manufacture so that we could extend into new markets by manufacturing pieces and assembling machines locally.”

That development includes a focus has been on side-applications, such as improving the system’s ability to cope with high levels of sediment or gravel, or adapting machines to deal with extreme conditions such as Canadian winters where temperatures can dip to -40ºC with 40cm of ice cover over the VLH.

Much of the power that drove the first industrial revolution is available today, but is not exploited. In Germany in 1927 there were more than 35,000 water mills still in operation. A further 25,000 were registered in England and around 100,000 are estimated to have been in operation in France.

A 2002 EU hydropower survey, found 100 GW, or 450 TW/h per year, of hydropower in Europe that was technically – but not economically – exploitable.

Outside Europe, there are many times more small scale unexploited hydropower sources. There are 63,000 km of large irrigation canals in Pakistan with heads of 0.3 to 2.5 meters every few kilometers, offering an unused potential somewhere between 5 GW and 15 GW. And there are thousands of kilometers of similar irrigation canals in India, Australia, the US, and other countries. A 2004 survey of the US estimated there is approximately 21 GW of low head, low power sites and 26 GW of high head low power sites that could be exploited – not necessarily economically.

Whether many of these once important power sources will ever be brought back into operation is questionable. While the VLH opens up certain niches, it has its economic limitations.

“We can make it more flexible and adaptable to different situations,” says Marc Leclerc. “But we can’t drop the cost and keep the same design. Harnessing low heads means harnessing big flows and big flows mean big machines. We are working with tens of cubic meters of water per second so our machines are big and heavy. Our industry has a problem of weight. It is price per kilo. If a machine is heavy it is expensive. There is no way to avoid that.”