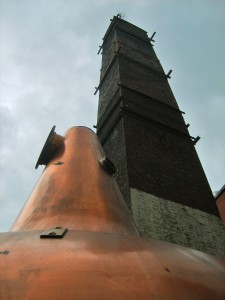 The waste from Scottish whisky production will be converted to  a bio energy source. The advanced biofuel it produces is very close to gasoline in energy density.

Each year the Scottish whisky industry produces about 1.6 billion liters of ‘pot ale’ and 500,000 tonnes of ‘draff’ as waste by-products. Celtic Renewables, a spin-off company from Edinburgh Napier University, is using an updated version of a commercial process from the last century to convert that whisky waste into butenol for use in the chemicals industries or as a biofuel.

Biobutanol is non-corrosive. It has a lower vapor pressure and higher flashpoint than ethanol, making it easier to store and handle. Biobutenol is approved as a bio-blend for fuels in the UK. The US Environmental Protection Agency approves blends of up to 16% biobutenol with gasoline. By comparison, ethanol is limited to 10% blends. Butanol can also be blended with a greater range of fuel grades than ethanol. Because it is so similar to gasoline, biobutanol can be stored in gasoline tanks and pumped through gasoline pipelines (ethanol cannot).

The US Navy has developed methods to convert one variant of biobutanol into jet fuel. It can also be converted to diesel, or used in a range of chemical products and plastics.

Celtic Renewables’ butanol production process is well-tested. Between the 1920s and the 1980s, acetone-butanol-ethanol (ABE) production was common across the world. However, in the 1960s a flow of cheap solvents from the expanding petrochemical industry made ABE production uncompetitive. It continued in markets such as South Africa and the USSR where access to fossil fuel was difficult. The last ABE plant in China closed in 2004.